ResearchED: Most Dangerous Man In History Who Accidentally Killed Millions Of People

Have you ever thought about how life would actually be without the development of technology and the everyday things around us? Growth would have been stunted. However, for the development to come about, the key ingredient would be invention.

Without the inventions of things like the telephone or automobiles or radium or the computer, human beings would still be stuck in the Neolithic Age.

However, inventing is all about trial and error and in some cases, these inventors can prove to be fatal, costing the lives of millions.

One single scientist created three inventions that accidentally claimed the lives of millions of people including himself. Not only did these inventions decrease the average intelligence of people all around the world but also increased crime rates and worked as a catalyst in two completely separate environmental disasters whose repercussions we are dealing with to this date.

The Scientist Who Accidentally Claimed The Lives Of Millions Of People

Thomas Midgley Jr. was a highly decorated chemist who was a celebrated award-winning genius who developed two of the biggest game-changing discoveries of the 20th century.
Nearly 70 years after his death in 1944, Midgley is now regarded as the man who contributed more damage to the world than any other human being who has ever lived.

Thomas Midgley Jr came from a legacy of inventors. His father, Thomas Midgley Sr. was also an inventor notably in the field of automobile tires. His grandfather is the renowned James E Emerson who is known for his invention of the inserted tooth saw.

In 1905, Thomas Midgley found an insatiable curiosity in the periodic table owing to his chemistry teacher in the Betts Academy at Stamford, Connecticut. This insane fascination of his is what led to his demise as well as that of millions of people.

To describe Thomas Midgley Jr.’s legacy in a very toxic nutshell, he was the man behind the introduction of leaded gasoline. For an encore, he also went on to invent chlorofluorocarbon (CFCs) which also damaged the planet just a few years later.

The gasoline of the early 20th century was of poor quality and caused engine knocking, which reduced both power and fuel efficiency and led to breakdowns.

Engine knocking is the uneven burning of fuel in an engine’s cylinders. When cylinders have the correct balance of air and fuel, fuel will burn in small, regulated pockets instead of all at once. After each pocket burns, it creates a little shock, igniting the next pocket and continuing the cycle. Engine knocking happens when fuel burns unevenly and those shocks go off at the wrong time. It results in an annoying noise and potential damages to an engine’s cylinder walls and pistons.

However, Midgley Jr found a way to alter the chemical makeup of gasoline by adding bromine from seawater and tetraethyl lead. Now mind you, Bromine is the third lightest halogen and its compounds are used for water treatment in swimming pools and hot tubs and are also used to control algae and bacterial growth in industrial processes.

There was a huge demand for Bromine in order to prevent the formation of lead oxide on the engine’s values. It was extracted from the sea water as it was the only cost-effective source of Bromine.

Hence, in 1921, Thomas Midgley Jr invented the “no-knock” or leaded gasoline that turned out to be an appealing solution to avoid engine knocking and potential permanent damage to vehicles. The company named the substance “Ethyl”, avoiding all mention of lead in reports and advertising.

However, what is rarely mentioned is that the production of this tetraethyl lead caused the demise of at least seven workers in the 1920s. These deaths weren’t peaceful either. They were violent and involved a lot of suffering including hallucination and insanity.
In fact, Midgley Jr did not escape unscathed either. He had to take a long vacation in 1923, to recover from lead poisoning.

About a year later, Midgley wrote a paper about the hazards of lead poisoning. In the decades ahead, it was determined that lead additives to gasoline were highly toxic and were pollutants which caused blood and brain disorders in children, antisocial behavior, and also lowered IQ levels.

According to the Economist Rick Nevin,

“The delay between lead gasoline gas exposure and poisoning, and violent crime increase is around 20 years.” 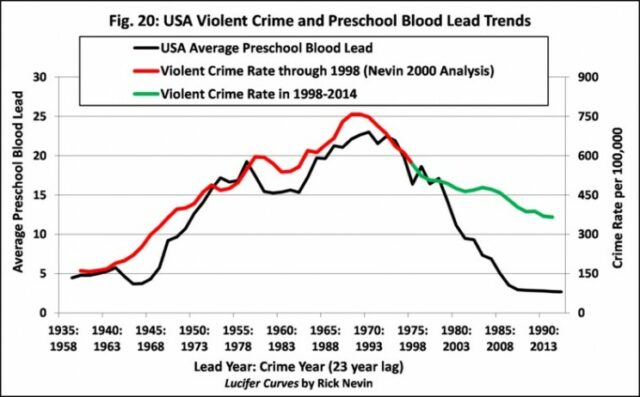 He is a housing consultant and the author of the book The Lucifer Curves: The Legacy of Lead Poisoning. According to him, lead pollution and violent crimes have a rather mutually inclusive relationship.

An estimate of 35% of U.S. homes still contain traces of lead-based paint.

Read More: Inventors Who Were Killed By Their Own Inventions

In the early 90s, namely 1928, Midgely was transferred to work for a subsidiary of General Motors – Frigidaire.

His main task during his time there was to find safer and more affordable refrigerant substitutes. Existing refrigerants used compounds such as ammonia, chloromethane and sulfur dioxide which were either flammable, toxic, or both. Owing to these limitations, the search was on for an alternative safe, non-toxic refrigerant.

Midgley synthesized the colorless gas dichlorodifluoromethane. It is an amalgamation of chlorine, carbon, and fluorine. The mixture was named CFC or a chlorofluorocarbon. The trademark given for this product was “Freon” and it was used as a refrigerant and aerosol spray propellant.

However, in 1974 a study by Mario Molina and F. Sherwood Rowland portrayed that CFC’s were causing the destruction of the ozone layer which in turn reduced the natural protection of the earth against the harmful sun rays. They found that a single chlorine atom was able to destroy around 100,000 ozone molecules before becoming inactive. Other evidence soon followed.

However, soon enough he contracted lead poisoning. In 1940, Midgley Jr. became ill with Polio and it left him disabled. He used his inventing wiles to develop an elaborate string and pulley system to help him lift out of bed.

Tragically, he died of strangulation when he got entangled in those ropes of his own assistance device.

Thus, bringing about the end of the most harmful inventor in history.

Owing to his inventions, Thomas Midgley Jr. greatly contributed to the poisoning of three generations of children – lead poisoning, increased the risk of skin cancer and other skin problems related to exposure to UV rays and contributed greatly to global warming with regards to the invention of chlorofluorocarbon (CFC) also known as Freon.

According to environmental historian, JR McNeill,

“Midgley had more adverse impact on the atmosphere than any other single organism in Earth’s history.”

Thomas Midgley Jr’s legacy is one of death and decay. It has been almost more than three decades since his demise and yet we’re still suffering the consequences.

10 Crazy Inventions That Will Make You Say “WTH”