Since time immemorial, India has always been known as the land shrouded with folklore and mystery. There are so many stories, myths and cultures that revolve around the ancient Gods and saints that to this date, India stays true to the title.

The country is home to various places of worship that have stood against the ravages of time and are century-old. Such places allude to people mostly because of the myths surrounding them. Sometimes the faith of people here is rewarded in the form of miracles, however, sometimes, it’s shunned with a curse.

But this particular fort garners the history and culture of Himachal Pradesh and is a witness to the ravages of time and atrocities imposed on it.

One Of The Largest And The Forgotten Fort Of India

The Kangra Fort is one of the largest forts in India with a towering main entrance, intricate wall carvings and stairways. It is situated on the outskirts of Kangra about 20km from Dharamshala. The fort bears witness to myths and histories for almost four millennia with its earliest mention recorded in the works of Sanskrit scholar Panini as well as The Mahabharata. The fort comprised beautiful courtyards, three temples, a total of 11 gates and 23 bastions, and stairs that lead to the fort’s highest point until a major earthquake shook its foundations.

Over the years, Kangra Fort has changed many hands, starting with the Katoch Dynasty to the Mughal Empire. It passed into the hands of Sikh forces, the Gorkha armies laid siege to the fort and the British used it as a garrison. The fort was looted and invaded over and over by all those who fought to claim it for their own. It was believed that whoever held the keys to Kangra Fort, held the hills and the history of Kangra Fort bears testament to this dictum.

During the Kurukshetra war, in Mahabharata, Dronacharya whose loyalty lay with the Kauravas created a chakravyuh to stop Arjun’s son Abhimanyu. Krishna and Arjun were the only two people who knew how to escape it and hence it was mandatory for them to be absent when the plan was in motion. 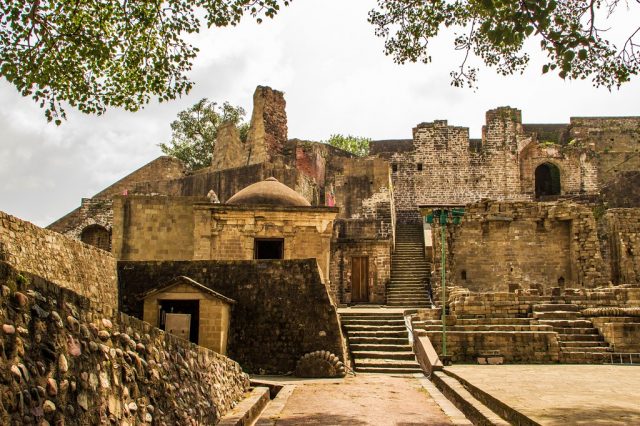 And so, a Maharaja named Susharma Chandra, who was fighting for the Kauravas, was given the task to distract Krishna and Arjun by luring them away, to the other side of the chakravyuh thereby causing the death of Abhimanyu.

What is not known much is that Susharma Chandra belonged to the Katoch Dynasty. After the defeat of the Kauravas the Maharaja is said to have left his seat in Multan and retreated to Kangra, where he seized control of the Trigarta kingdom and built the Kangra Fort to keep his enemies at bay.

The Secret Walls Of The Fort

The fort encompassed a humongous amount of wealth in the form of precious jewels, diamonds, gold coins and gold sculptures. The fort was home to a Brajeshwari temple and rulers and emperors from every corner of the world would send jewels to the temple in exchange for good karma. 21 treasure wells that ran 4 meters deep into the ground harbored these jewels.

According to the Persian historian, Muhammad Qasim Hindu Shah Astarabadi,

As a result of which, from Alexander The Great to the Mahmud of Ghazni, had their eyes on the Kangra Fort. However, despite how heavily guarded the fort was, Mahmud of Ghazni was the first invader who plundered and looted eight of the treasure wells. British rulers seized jewels from five of the wells in the 1800s.

Shrouded by legends, the fort bears the brunt of the ravages of time but remains a silent witness to history. According to the locals of the area, eight of the wells that occupied the jewels have still not been discovered and nobody in the entire world knows the locations of these eight wells.

Hence, it seems India will forever be a land shrouded with mystery be it for the outsiders or for its citizens.

Padmanabhaswamy Temple ‘Vault B’ In Kerala: The Only “Cursed” Inaccessible Chamber In The Entire World