Demystifier: Why Is Apple Accusing Meta Of Taking Almost 50% Of Metaverse Purchases?

Demystifier: An ED Original where we take a complex topic but the content is written in such a way that it is knowledgeable and easy to comprehend at the same time.

With the rebranding of Facebook into meta, the metaverse has gained quite the attention from tech giants like Microsoft, Roblox Metaverse and Nvidia Omniverse with a market opportunity that might reach up to $800 billion by the year 2024.

According to most people, metaverse just might be the new evolution of the internet – Web 3 or Web 3.0. This is owing to the fact that the metaverse is a virtual reality that is perceived on a person-to-person basis. It means different things to different people so much so that the thin veil between the virtual world and reality has become blurred beyond recognition.

However, in a recent turn of events, Mark Zuckerberg is being sued by one the biggest tech giants – Apple.

Mark Zuckerberg is fighting tooth and nail for the metaverse but unfortunately, it’s not going well. The value of his company fell by 230 billion dollars in a single day and that’s largely owing to the increased competition from other tech giants. Everyone wishes to capitalize on the next era of the internet but nobody has put more pressure on Mark Zuckerberg than Apple. 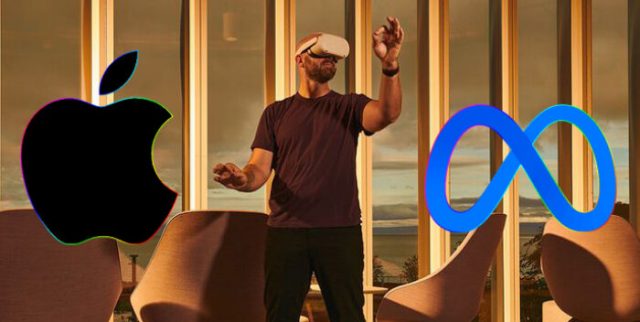 Most people associate metaverse with virtual reality, however, Apple hasn’t released its own VR headset but Apple has three advanced business strategies that will essentially make it impossible for Mark Zuckerberg to win in the long term.

In the last week, Meta declared that it would charge creators in the metaverse, a fee upto 47.5% sell virtual wares in its metaverse – significantly more than Apple charges developers on its App Store.

“We are testing virtual sales inside our metaverse platform Horizon Worlds. Creators will be able to sell things like fashion accessories for users’ avatars and exclusive access to parts of their customized virtual worlds.”

So, the question arises why is Apple accusing Meta.

Read More: ResearchED: What All Is Going To Happen In The Metaverse: Now And Future

Apple Accuses Meta Based On The Fee Its Charging Its Creators

Apple charges a developer fee of 30% on in-app purchases including sales within apps using the App Store as the conduit. This negatively impacts apps like Facebook, Instagram and WhatsApp which are all now a part of Meta.

According to Mark Zuckerberg, “the policy allows Apple to charge monopoly rents on app maker revenues.”

This was not the first time that Zuckerberg was involved in a feud with Apple. Earlier he had called Apple out on it and had made a statement that he was forming new policies to help metaverse creators evade the Apple App Store fee.

“As we build for the metaverse, we’re focused on unlocking opportunities for creators to make money from their work. The 30% fees that Apple takes on transactions make it harder to do that, so we’re updating our subscriptions product so now creators can earn more.”

However, what I fail to understand is how charging a fee almost 20% more than Apple is of any help.

Mark Zuckerberg has strategically broken down the fee into two parts. First, there’s the platform fee that Meta charges for sales made on the Meta Quest which is 30%. Initially known as Oculus Quest, Meta Quest is a virtual reality headset developed by Oculus, a division of Facebook Inc., released on May 21, 2019. It is a standalone device that can run games and software wirelessly under an Android-based operating system.

On top of Meta Quest, Meta is charging a fee of 25% on sales made on Horizon Worlds which is a free virtual reality, online video game with an integrated game creation system.
Thereby, Meta plans on charging a fee of 47.5% from the seller thereby leaving only 52.5% for them.

According to a statement made by a Meta spokesperson to Business Insider,

The hypocrisy lies in the fact that on one hand Mark Zuckerberg criticizes Apple for charging a fee on the sales on in-app purchases and on the other hand he is charging the same creators notably a lot more than any other platform.

“Apple takes 30% of software and a significant margin on their devices. They’ve capitalized on their market power to favor their own business interests, which comes at great expense to developers.”

However, at the heart of this conflict lies the dissent from Apple’s Chief Executive Officer Tom Cook who is absolutely against how Meta laid its foundation by trading free access to popular social media apps like Facebook and Instagram for the data of the user in order to sell targeted advertising.

To conclude, neither Meta nor Apple will back down from their stances but what they fail to realize is the impact their dispute is going to have on the common mass.

Owing To The Latest iPhone 13 Series, Here’s How iPad Mini Is Better Than An Actual iPhone