Here’s How Starbucks Is Also An Unconventional Bank

I suppose I can speak for most when I say, coffee is not just a hot beverage to drink on a Sunday evening at the terrace and think about how great life is. No. Coffee is a way of life. For people like us, we worship coffee from the beginning of the day, till the moment we are off to sleep.

Thereby, starting the day with the perfect cup of coffee is a must. Now, this coffee shop is one of the most successful companies in the world, not only in the coffee shop business. The reason behind its undulating success is owing to the experience it has been able to provide that changed how the world perceived coffee shops and how many of us drink coffee outside of our houses. The name of this renowned coffee shop happens to be Starbucks.

In case you didn’t know, Starbucks provides a buffet of some of the most exclusive flavors to choose from. Starting from spiced carrot latte to a caramel mocha with Irish syrup, Starbucks has you covered on all fronts.

However, apart from serving one of the greatest coffees there is, Starbucks also happens to be a bank. Unconventional it might be, but it is what it is.

The Origin Of One Of The Greatest Coffee Shops

Starbucks was founded in Seattle in 1971 by the trio- Jerry Baldwin, Zev Siegl and Gordon Bowker with Alfred Peet as their mentor. Alfred Peet was a Dutch immigrant and a coffee-roasting entrepreneur who had begun importing fine arabica coffees into the US in the 1950s.

In fact, the name “Starbucks” finds its origin in a character named Starbuck who was the first mate in the novel Moby Dick. Initially, Starbucks sold only coffee beans. It was only in 1987 when Howard Schultz purchased Starbucks from its founders and turned it into a coffee shop.

Over time Starbucks expanded. Between 2000 and 2007, Starbucks grew more than four times and opened around 1500 new stores every year. It expanded so much that over time, a phenomenon called the Frappuccino Effect was observed.

The Frappuccino Effect is when the real estate prices increase significantly when a Starbucks or any other outlet is nearby. This phenomenon has reportedly been noticed in many cities worldwide.

Read More: In Pics: It Is Unfortunate That These Starbucks Drinks Are Not Available In India

How Is Starbucks An Unconventional Bank?

Eventually, Starbucks launched its loyalty card and app, that were responsible for roughly 40% of the company’s total sales. Instead of paying with cash or credit cards, customers could add money to their Starbucks account and pay with the app or card, giving them twice the number of stars which let the customers redeem their free drinks.

Given Starbucks’ stature and size, customers aren’t afraid to put their money in the Starbucks app or card. According to Wallstreet Journal data,

“Starbucks’ customers in the USA have around $1.2 billion in cards and apps, which is higher than the deposits held by Customers Bank ($780 million) and the Green Dot Corporation ($560 million).” 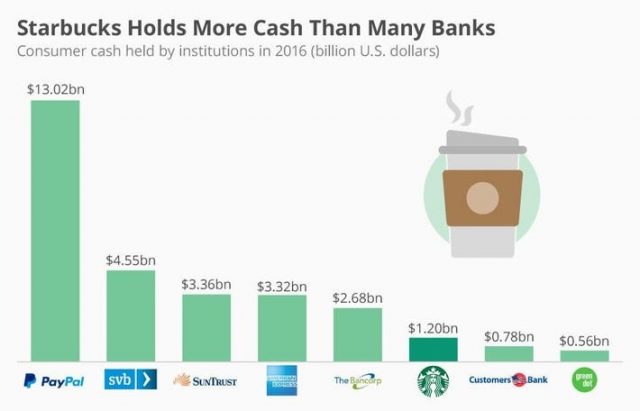 By putting money in their Starbucks account, customers unknowingly provide Starbucks with billions of dollars of loan, at 0% interest, which the company can use to invest in the market, earn profits for free, or spend on expanding.

About 10% of this money will be forgotten or lost therefore never be used, which is known as breakage.

How Is Starbucks Different From Normal Banks?

Unlike general banks, Starbucks doesn’t need to keep a Federal Reserve, that is, a safe, flexible, and stable monetary and financial system as people can only withdraw coffee and other Starbucks products.

According to a Korea-based tabloid, banks have expressed concerns that if Starbucks does enter the financial industry, it will be too big of a threat to them and they will not be able to compete.

Isn’t it amazing that Starbucks opened as a single small store in 1971 and became a coffee giant at the end of the millennium? Starbucks has led a coffee revolution in the United States and hasn’t stopped since.

Our World Would End If Starbucks Disappeared