Where Does The Blame Lie When 86% Of India’s Supported The Implementation Of The 3 Repealed Farm Laws?

Roughly two years ago, in 2020, the entirety of India stood in the midst of an epic political crossroad that had the potential of changing the make of the land with great effect. The three farm laws which rattled the entirety of the nation was the sole proprietor of the said proverbial crossroad. It did not just make the world take note of some amazing turnout in the form of the farmer protests but also made people take heart to the fact that India was still a democracy where our voices meant something.

However, according to recent reports, almost 87% of farmers from numerous outfits were in support of the implementation of the three farm laws. These revelations came in the form of the now revealed Supreme Court report released by the panel appointed to review the laws. To put matters into perspective, it is of absolute necessity to evaluate which party is really to blame for the majority not being heard.

What Did The Report Reveal?

According to the Supreme Court appointed panel, the clauses present in the three farm laws had seen overwhelming support from the farming community. Apart from 40 farmer’s unions across the country, the farm laws had been accepted by the rest of the 73 outfits the panel had interacted with. Out of the 73 unions, 61 of them had accepted the farm laws wholeheartedly without any amendments being imposed upon them while the rest had proposed acceptance provided a few minor tweaks were put in place in the reformation.

The ifs and buts of the report were revealed by Anil Ghanwat, a farmer leader and one of the members of the Supreme Court appointed panel. The data in itself is eye-opening, making the entirety of the country wonder at the state of the country where democracy has taken itself to the stretcher. It must be stated, however, that the agitating farmers did not want anything to do with the report as they refused to respond to the panel’s questionnaire. Furthermore, Ghanwat’s testimonial also reveals that the panel had advised the Centre to not repeal the laws since it would be unfair to the “silent majority.”

Also Read: After 100 Days Of The Farmers Protests, The Government Still Stays Numb

Who Is To Blame For The Majority Being Unheard- Farmers Or Centre?

Through the course of the implementation of the farm laws in 2020 till the day it was repealed in 2021, the only constant that rang through the entirety of India was the regurgitating protests of the farmers. The agitations sought redressal in the form of dialogue addressing the provisions for Minimum Selling Price and the presence of the same. Lighting the fires of the revolution aflame, the Centre still remained unfazed at the grievances of the farmers. Rather than addressing the said concerns, the Centre took the prerogative of vilifying them.

The vilification reached astounding extremes as the Centre attributed the protests to be an international conspiracy hatched by India’s enemies. From Western capitalist market players to China-backed Communists, almost the entirety of the world’s wide diaspora of international market players with significant power was blamed intrinsically by the Modi government. Unfortunately, through the course of it all, they failed to address the concerns of the masses. 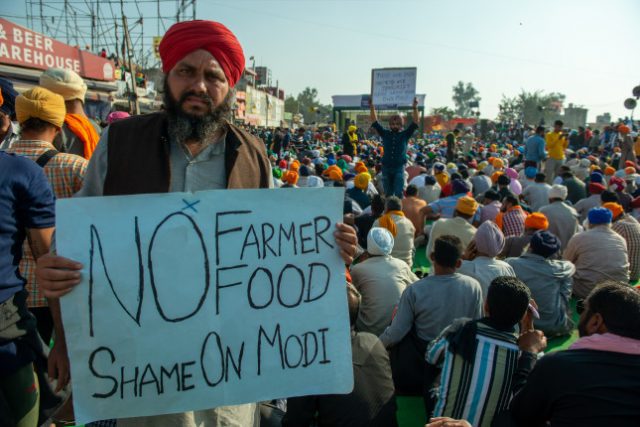 The Centre went through great pains to quell the agitation of the farmers, unfortunately, none of it amounted to them sitting across one another with a cup of tea in hand. On the contrary, the government chose to dispose of the farmers with water cannons and tear gas pellets. Without an iota of provocation, the Modi government had already begun deploying CRPF cadets going berserk at a crowd of chanting sloganeers.

It would have been fairly understood if the suppression of the government ended there but it only expanded manifold. The protestors huddled together at the historic protest site, Jantar Mantar, were privy to being caged in inside a makeshift penitentiary.

Surrounded by 80-odd yellow police barricades, a journalist recounted their experience being “locked up” inside the open air prison. They said;

“Between us were 80-odd yellow steel police barricades, two dozen paramilitary platoons with tear-gas bomb and grenade launchers, water cannons, hundreds of other irascible police personnel and of course growling dogs. Where was I? Wagah border, Kashmir, Tikri, Palestine?” 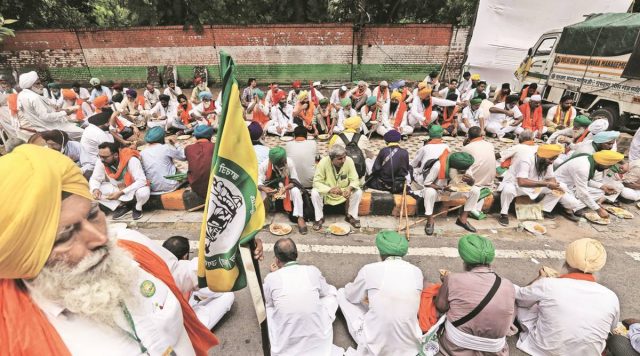 Numerous questions now come into play; who indeed was to blame? It was fairly obvious to note that although the Modi government did think about the farmers, they failed to see the whole thing through. As it is the farm laws, in themself, had seen their inception under extremely shady circumstances with most of the Opposition not being present at the voting table in the Parliament as it was passed “unanimously”.

At the end of the day, the Bill’s passage and implementation is little about the 86% who did not find a voice but about the Centre who played the game of suppression owing simply to a coterie of egotistical reasons. The paramount being that they wouldn’t lose. However, after almost a year-long struggle and almost 700 deaths later, it was the agitators who had the last laugh. Maybe the next time around, the “silent majority” would dare to speak up before it’s too late. Otherwise, the government has depicted time and again that it does not understand the difference between a peaceful protest and a riot.

Sources: The Print, The Indian Express, The Wire

Will India End Up Upsetting The West With Its Oil Deal With Russia?