ResearchED: What Are The Controversies Regarding Vivek Agnihotri’s “The Kashmir Files”?

The Kashmir Files, which was released on 11th March, is a fictional story of a university student who learns that his Kashmiri Hindu parents were murdered by Islamist terrorists, not by accident as his grandfather claimed.

The film received mixed reviews from critics, with several calling it “exploitative,” but it quickly sparked a passionate debate on social media. Supporters believe it brings attention to a forgotten and violent period in Kashmir’s history, while detractors argue it is inaccurate and Islamophobic.

Meanwhile, Prime Minister Narendra Modi and prominent members of his BJP government have lauded the film, numerous BJP-ruled states have waived taxes on it, and police officers in Madhya Pradesh have been given a day off to view it. Mr Modi further dismissed the criticism as a “plot to defame” the movie.

Why has a low-budget film with no big stars polarized public opinion so much?

What Is “The Kashmir Files” All About?

The film is based on the exodus of minority Kashmiri Hindus also known as Kashmiri Pandits in 1990. According to numerous academic estimates, 1,00,000 Pandits evacuated the Valley out of a total population of 1,40,000; some researchers estimate the figure to be 1,50,000. Only around 2,700-3,400 Pandits are left in the Valley, according to the 2011 reports,  since very few people have returned.

Thus it is pretty obvious for the film to spark controversies because:

Kashmir Is In Itself A Controversial Subject

The film goes into the history of Kashmir, which has long been a contentious territory along India’s border with Pakistan.

Since the late 1980s, a violent insurgency against Indian control has raged in this Muslim-majority valley. In the 1990s, Islamist terrorists began attacking Kashmiri Hindus, particularly upper-caste Pandits, who were a minority community. Many people were slain, and hundreds of thousands were forced to flee their homes, according to some estimates. The majority of them never came back.

India’s federal government mobilized the army and gave it broad arrest and interrogation powers, and security forces have been accused of using excessive force against locals throughout the years. They dispute the charges, but the region has since seen large, often violent protests against the center, some of which have resulted in civilian casualties.

Also Read: Why Did IMDb Change The Rating Method On The Kashmir Files’ Page? 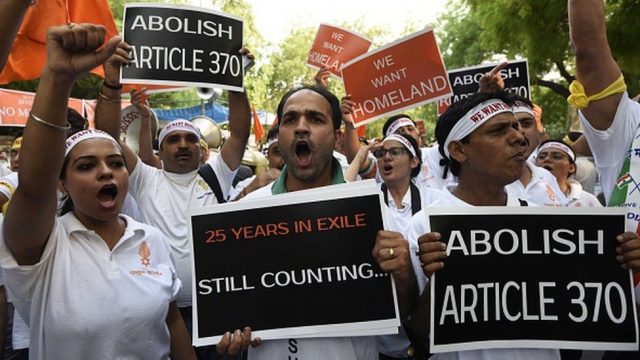 The nationalist party has also utilized the contested region as a campaign topic, focusing on the Hindu flight and accusing Congress, which was in power before and after the events, of ignoring the misery of the Pandits. The community, on the other hand, claims that no political party has done much to help them.

According to writer and novelist Rahul Pandita, while Kashmir’s troubled past has inspired several books and films, few have completely concentrated on the exodus and what led to it.

According to him, The Kashmir Files has evoked such a passionate response because the Pandits have long thought their story has been suppressed. “They’re experiencing, if I may call it that, an emotional catharsis,” he adds.

Mr. Pandita, whose book Our Moon Has Blood Clots: A Memoir of a Lost Home is based on his experience fleeing Srinagar as a teenager, said he is still amazed by how little people in the country are aware of this chapter of Kashmir’s history.

“My book is into the 10th year of its publication, and I still receive at least three-four emails every single day from people from all corners of India, or some from outside of India, saying we had no idea about the quantum of this tragedy,” he says

Others, however, argue that it is unsurprising, given that many chapters in contemporary India’s history have been rarely presented by mainstream cinema, such as atrocities against lower castes, allegations against India’s security services in the north-east, or states where Maoist insurgencies have occurred.

Sanjay Kak, a Kashmiri Pandit who has covered the region extensively as a documentary filmmaker, says, “I’m a little baffled by this constant refrain that this is a story that has not been told. It’s not been told by Bollywood but Bollywood doesn’t tell these stories,”

“When was the last time Bollywood told us the story of the 1984 riots in Delhi or the story of the Gujarat [riots] in 2002? There are thousands of stories in this country that don’t get attention in the mainstream.”

The dispute, however, stems not from the history of the exodus – no one denies that it occurred – but from the way the tale has been recounted and who has told it.

Politics And Polarization Exist Across The Country

Although the film has struck a chord with Kashmiri Pandits, some have criticized it for lacking nuance in light of the complex history. Some have commended the performances, while others have said that this does not compensate for the film’s anti-Muslim bias.

Viewers were split as well: some were moved by the film and believed it would help heal the wounds, while others were disturbed by the stereotypical representation of Kashmiri Muslims and the message it sent.

Some have also advised not dismissing the film out of hand: “You can’t resolve any differences when you won’t even acknowledge the pain of those who suffered.”

However, it appears that BJP ministers are the loudest supporters – Smriti Irani, the Minister for Women and Child Development, took to Twitter to urge people to see the film,  “so that this history soaked in the blood of innocents may never repeat itself”.

Over the weekend, the filmmakers met with Mr Modi, and certain Bollywood stars who have tweeted in support of the film, such as Akshay Kumar and Kangana Ranaut, are considered as supporters of the government.

When asked if the film could only be created under a BJP government, Anupam Kher, the principal actor, reportedly said:  “That’s true… Every film has its time.”

Vivek Agnihotri, the film’s director and a BJP supporter, has been accused of errors in his work. After martyred Squadron Leader Ravi Khanna’s wife filed a lawsuit alleging that the details were factually false and demeaned him, a court barred Agnihotri from incorporating sequences showing the air force squadron leader and his death.

Mr. Agnihotri’s earlier film, The Tashkent Files, was banned for portraying rumours as facts and alleging a plot in the death of former Prime Minister Lal Bahadur Shastri. Mr Agnihotri received a legal letter from Shastri’s grandson, claiming that the film was attempting to “create unwarranted and unnecessary controversy” in order to defame him.

“It’s not about Hindu or Muslim like people would want to believe,” Mr. Agnihotri has said in defence of The Kashmir Files.

However, by Monday night, Mohammed Zubair, co-founder of the fact-checking platform Alt News, had released many videos of audiences chanting anti-Muslim slogans during screenings of the film.

Authorities pummeled and assaulted those who had purchased tickets at the multiplex.

Authorities allegedly assaulted a 16-year-old boy and manhandled two girls who were present, according to the netizens who posted videos of the incident on Twitter.

Its reception also stands in stark contrast to Shikara, a 2020 film co-written by Mr. Pandita that explores the same history. The makers were labeled “traitors” by the Hindu right-wing at the time for supposedly whitewashing history.

“I think people wanted to see it in a more stark form, shorn of all sensitivity. We did not do that,” Mr. Pandita said.

“What this film does do is to tell the story exactly as the right-wing wants,” Mr Kak says. “Shikara did not meet that qualification so it came under attack. This one seems to have the entire right-wing ecosystem coming out to push it into the world.”

Given the issue’s complexity, Mr. Pandita believes there is space “for all kinds of films,” but Mr. Kak is not so sure. “There is an insistence that this is ‘the truth’. But you can’t tell the story of Kashmiri Pandits without also telling the story of Kashmir in these 30 years. And maybe that’s why people have not told the story in Bollywood before. Because there’s no space to tell the story with the complexity that it deserves.” 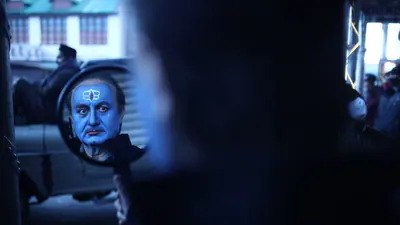 Why Won’t Our PM’s Photo Be On Vaccination Certificates In These 5 States?