Believable Story Of Former NSE CEO Getting Misled By Himalayan Yogi She Never Met, Only Emails

The former Chief Executive Officer of NSE Chitra Ramkrishna on the advice of a mystic “Himalayan Yogi” appointed Anand Subramanian as Chief Strategic Advisor in 2013. He was an unknown person, without any prior awareness of his previous work profile, he was appointed. Subramanian’s salary was changed slowly to three-fold, around Rs 4 crore. What is the conspiracy?

Who Is The Himalayan Yogi? 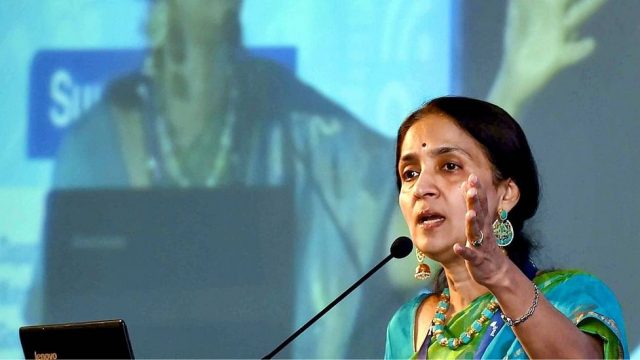 The Himalayan yogi was the “Paramahansa”, the “Siddha Purusha” who lived in the Himalayan ranges, his spiritual blessing was omnipresent. The Yogi even in one of the mails advised Ramkrishna, “Today you are looking awesome. You must learn differently to(plait) your hair which will make you look interesting and soothing”.

Why did Ramkrishna, the Forbes Women leader of the year 2013 who brought the largest stock exchanges in the world, believe in a spiritual entity? Why would the confidential information of NSE be shared with the guru?

Many believe she and the Himalayan Yogi were fraudulently transacting money. But would Ramkrishna be so naive as not to hide these mails? During the investigation, why would she claim that the “Siddha Purusha” advised her? Would she, as a CEO, risk everything for the salary of a person?

Her absolute faith in the Yogi may arise from the belief of Indians in mystical traditions and impregnated divinity in daily lives. The person who claims to be the Yogi may have practised shared psychosis to delude Ramkrishna into thinking of him as a guru, the ultimate saviour.

Also Read: India’s Interesting Cults And Stories Behind Them

Sacrificial enterprise has been intertwined with religious doctrines across the world for civilizations. The Burari deaths in North Delhi, where 10 members of a family committed suicide in 2018 is still astounding. How was it possible for all the members to be influenced under the delusions of rituals?

Meanwhile, a woman from Hardoi killed her neighbour’s three-year-old son in 2021 following the advice of a Tantrik. She could not conceive for years. Superstition came to her assistance. The possibility lies that Ramkrishna is also a victim of the precarious game of superstitions and myth. Anand Subramanian was appointed to a higher position without any prior experience in the finance sector. His salary was much more than other senior NSE officers. Even his wife Sunita was receiving a huge salary. As Subramanian received appraisals twice a year, scrutiny grew amongst his colleagues. He got promoted as the Group Operating Officer (GOO). During Ramkrishnas’s tenure as MD and CEO from April 2015 to October 2016, he was her advisor.

Several complaints were registered to the Securities and Exchange Board of India(SEBI) in 2015-16 regarding Anand’s appointment. The mails between Ramkrishna and the guru were revealed by them. In February, Anand Subramanian was taken under CBI remand. On March 6, Ramkrishna was arrested concerning the co-location scam.

Chitra Ramkrishna denied relation with Anand during the hearing of the court. She has been non-cooperative during questioning by the CBI. Ramkrishna is already under the eye of SEBI. The CBI arrest doubles the doubt to the claims of Himalayan Yogi. Are the scam and Yogi related? Is Anand Subramanian, the Himalayan yogi?

Is Investing In Mutual Funds A Scam? Let Me Clarify As A Commerce Student