ResearchED: The Filmy Rise And Fall Of Ashneer Grover

Ashneer Grover is a household name these days, but for reasons that he wouldn’t have expected. An IIT Delhi and IIM Ahmedabad alumnus, he appeared on Shark Tank India’s season 1 as an investor. He instantly became famous, or rather infamous owing to his rude and brash comments.

He became fodder for memes. When Shark Tank India episodes that did not feature him and Aman Gupta were aired, the viewers complained of the show having become dull. Then, old episodes featuring Ashneer were aired. So, even though he was criticized for his harsh remarks, that’s what made the show interesting to viewers. A double-edged sword indeed.

Till before the show, his life was on an upward trajectory and he was at the highest point of his life. But after every highest point, there starts a downward trajectory – and the same happened with Ashneer as well. His fall started with a leaked audio clip and ended with him resigning from the post of co-founder and MD of BharatPe.

Ashneer was born in 1982 in Delhi to a prosperous family. His father is a Chartered Accountant and his mother a teacher. A student of Apeejay School, Ashneer was meticulous in his studies. He cracked IIT JEE Advanced – one of the toughest exams of India and took admission in IIT Delhi for B.Tech. in Civil Engineering.

He was also an exchange student of INSA Lyon – Institut National des Sciences Appliquées de Lyon (France). Only a handful of students are selected from a huge batch, and Ashneer was one of those students. That itself shows how extraordinary he was when it came to studies.

After completing his Bachelor’s, he pursued an MBA from IIM Ahmedabad, the most sought-after business school in India. Owing to his exceptional academic background, he got a job at Kotak Financing Bank in 2006 – right after his MBA. He was the Vice President of the Bank from 2006 to May 2013.

Then, he went on to join American Express as the Director of Corporate Development and he worked there for almost two years. Then, he joined Grofers as its Chief Financial Officer from March 2015 to August 2017, the most crucial months for the company’s growth. Needless to say, Ashneer played a notable part in making the company what it is today.

Then for 1 year, he was the Head of New Business at PCJ Ltd. Soon after, he co-founded BharatPe with Nakrani and worked as its MD. 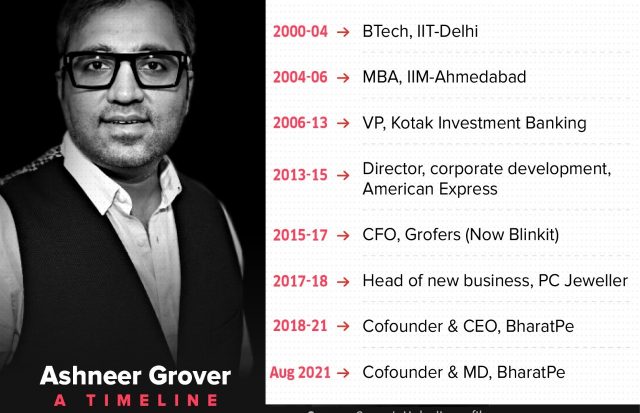 He is married to Madhuri Jain, an entrepreneur, and is a father to two kids – a boy and a girl.

BharatPe is a fintech company that caters to mostly small merchants. It offers the UPI service that is widely used by people. Currently, the app has over 1 crore downloads on Play Store and it is valued at $2.8 billion.

It is among the top five most valued Fintech startups in India. In February 2021, it was valued at around $922 million and then in August 2021, the valuation increased threefold to $2.8 billion when the company secured funding of $370 million in the Series E round from Tiger Global Management, Dragoneer Investment Group, Coatue Management.

The company also introduced BharatSwipe, a machine that accepts card payments absolutely free of cost. It was the first-of-its-kind disruptive machine that boosted the company’s growth significantly.

BharatPe does not charge a commission of transactions. Its earning model is based on disbursing loans to small merchants, whose loan requests are not sanctioned by the major banks.

Read More: Controversies That Judges Of Shark Tank India have Run Into

The Saga Of Ashneer’s Fall

All was going well. His appearance on Shark Tank made him a public figure. But then, an audio clip was leaked in which Ashneer and his wife Madhuri were allegedly abusing a Kotak Bank employee for not being able to secure Nykaa IPO shares for them.

However, Ashneer said that the audio clip is fake and some scamster is attempting to extort money from him by blackmailing him with the fake audio recording. Then, the audio clip was deleted from all social media sites. However, the Kotak Mahindra Bank said that it would take legal action against Ashneer Grover. 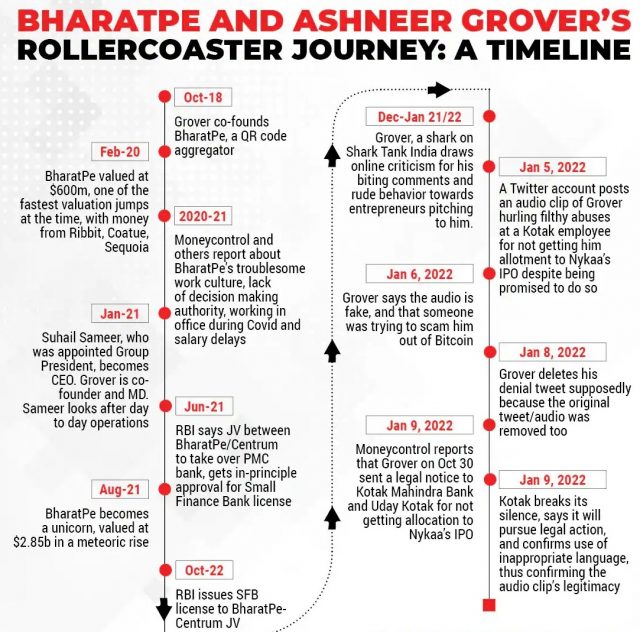 It is not like this controversy needed something more to aggravate it, but that is what happened. An email exchange from August 2020 between Grover and Sequoia India’s Harshjit Sethi was surfaced in which Grover allegedly used swear words at Harshjit.

Following all this, the entrepreneur’s public image and the image of the company were tarnished. Ashneer announced on 19th January 2022 that he is taking a voluntary leave till the end of March.

But that was not the end of Grover’s problems. Just 10 days later, the board of BharatPe announced an independent audit into the company’s internal processes and financials. The preliminary audit report detected fraud in the company in recruitment processes and detected payment to non-existent vendors.

Amidst media reports, BharatPe released an official statement saying, “We are deeply pained that the integrity of the BharatPe board or individual board members is being questioned time and again through misrepresentation facts and baseless allegations. The board in all its actions has followed due process in the best interest of the company. We would urge that the confidentiality and integrity of the governance review and board meetings is maintained by all. We request everyone, including the media, to show restraint and allow the governance review to take place in a thorough manner.”

Madhuri Jain, the wife of Grover, also came under major scrutiny for alleged misappropriate use of funds to finance personal trips, beauty treatments, and to pay her personal staff at home.

First, Grover filed an arbitration plea in the Singapore International Arbitration Centre to protect his 9.5% stake in the stake, amounting to 4000 crore Rupees. He said that he was being forced to exit the company with a much lower amount.

But, on March 2nd, he resigned from his post of MD and board of directors of BharatPe via an email. He said that he was “vilified and treated in the most disgraceful manner” during the course of this investigation. He also accused the investors of treating the company’s founders like slaves.

Any info about Ashneer has been removed from BharatPe’s website. The company issued a statement saying, “The Board will not allow the deplorable conduct of the Grover family to tarnish BharatPe’s reputation or that of its hard-working employees and world-class technology. As a result of his misdeeds, Mr. Grover is no longer an employee, a founder, or a director of the company.”

Ashneer Grover built a company valued at billions from the ground up in just three years. That is his excellence and his forte. However, his fall from such high has been quite cinematic and unfortunate, to say the least.

We do not hold any right/copyright over any of the images used. These have been taken from Google. In case of credits or removal, the owner may kindly mail us.
Feature Image Designed By Saudamini Seth