India is currently in the midst of ‘Operation Ganga’, a multi-airline attempt to evacuate the stranded Indians in the crisis-hit Ukraine.

The Russian invasion of Ukraine and the latter’s attempt at protecting itself has resulted in an extremely terrifying and trying time for all the people stuck there. This does not just include Ukrainian but also various immigrants, travellers, students and more who were present there while the crisis hit the country.

The government of Ukraine has currently shut down everything like schools, colleges, offices, construction sites and more due to missiles and bombings happening from the Russian army’s side.

For many days now Indians stuck in Ukraine had been trying to appeal to the Indian government to carry out evacuations as soon as possible, and finally they have started.

It was during one such evacuating flight that a SpiceJet pilot’s words touched many and gave hope during this trying time.

What Did A SpiceJet Pilot Say?

India is right now carrying out ‘Operation Ganga’ in which Air India, Air India Express, IndiGo, SpiceJet, and Indian Air Force will be carrying out rescue operations and bringing back Indian evacuees.

SpiceJet just evacuated Indians from Budapest in Hungary and it was on this flight that the pilot’s words to the travellers that went viral. People applauded for how encouraging the words were and that they gave some much-needed hope and relief to the people who were living under much fear.

#SpiceJet just evacuated our stranded people on our first flight from #Ukraine. We are now en route back to #India. Their optimism made us hopeful of helping more Indians who are witnessing the war, through more SG flights. #EvacuationFlights #RescueIndians #HopeForPeace pic.twitter.com/gLdxhhlsax

Read More: Tata Owned Air India Says ‘If We Don’t Then Who Will’ While Posting About Bringing Stranded Citizens From Ukraine

In the video the pilot says that “On behalf of the entire Spicejet family, we welcome you all onboard on this special flight from Budapest to Delhi. We are very happy to see all of you safe and sound. And are proud of each one of your courage and determination. You overcame the uncertainty, hardship, fear and made it here safely. And, now it’s time to go back to our motherland. It’s time to go home.”

Around 31 evacuation flights are supposed to be carried out as per reports that will bring back around 6,300 Indian citizens from the crisis-hit region. IndiGo will be operating 12 flights, SpiceJet four and Air India Express a total of seven flights. 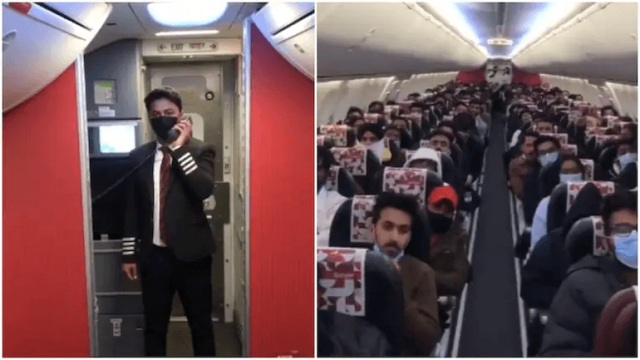 From March 2 to March 8 is the expected timeline of the rescue operation to bring back the total amount of citizens.

Already around 6 flights have been sent out under ‘Operation Ganga’ and around 1,377 Indian citizens have already returned.

Did US President Joe Biden Just Have A Trump, Rahul Gandhi Moment?