Even though it’s been centuries since evolution, there are so many things that are still unknown to us. With the advancement of technology we keep discovering new things almost everyday – some substantial enough to be shared with the world whereas some we keep only to ourselves.

However, do you ever wonder about the kaleidoscopic nature of an invention that happens to be the brainchild of an amalgamation between history and technology?

Discovery Of A Family Tree From The Neolithic Age

The Neolithic Age which was also known as the New Stone Age was an era of cultural evolution and technological development among prehistoric humans. It was supposedly the last Age before the Chalcolithic era began.

Our scientists discovered the human bones of a family from the Cotswolds, United Kingdom, that is as old as the tomb it was kept in, that is 57,000 years old . This family tree is the oldest family tree and predates the times when written records hadn’t come into existence – the Neolithic Age.

The findings of the research – a refined and detailed analysis of the structure of the prehistoric family was published in the British weekly scientific journal called Nature.

Read More: Did Santa Claus Truly Exist At Some Point?

What Does The Research Entail?

The research shines light upon the significance of family and ancestry of people who happen to be Britain’s first farmers. Due to the delicacy of the bones and structure owing to centuries of being buried, the remains were studied in the tombstone.

This tombstone is known to be Britain’s best preserved Neolithic tombs near Hazleton village in the Cotswolds. It is divided into two chambers that look like the shape of an “L.” The remains were examined by the researchers after extracting the DNA from the bones and teeth of 35 individuals who claimed that the “results were nothing short of astounding.” The DNA analysis unearthed the gender, age and familial ties of these remains.

According to Dr. Chris Fowler of Newcastle University,

“We have built up a much more detailed biographical picture of those individuals which makes them much more relatable to us as people.”

Upon discovery, it has been found that 27 of these remains were of biological relatives who belonged to a single extended family that consisted of five continuous generations of the aforementioned family. The ancestry of the majority lay with four women who mothered the children of one single man. 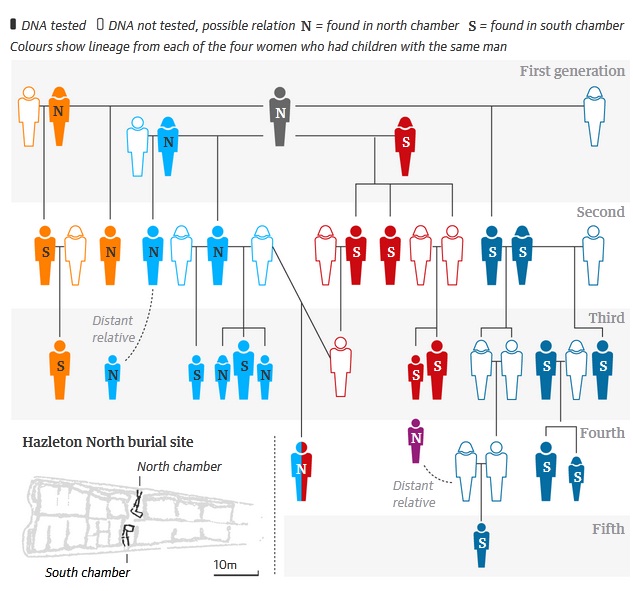 “It tells us that descent was important. When they were building these tombs and deciding who to include in them, certainly in this case, they were selecting people who were close relatives of the people who were first buried there. They have this close connection to their immediate ancestors and that extends over several generations. Family was important and you can see that with the inclusion of some very young children in the tomb as well.”

“The dead were buried according to the women they descended from.”

This decision to use the tomb for burial relied upon the relation with the father or descendant through the male line, that is, the patrilineal line. Hence, to bury the individuals in either one of the chambers heavily depended upon the first-generation women who were their ancestors.

“It implies that these first-generation women were socially significant in the memories of this community.”

Who Were These Members Of The Prehistoric Family?

The remains of those who have been found belonged to a group of Britain’s first farmers back in 3700 – 3600 BC. The construction of the Hazleton tomb began around then almost 100 years after the introduction of cattle and cereal cultivation. According to the archeologists, these farmers moved around quite a bit and herded animals. Their daily source of food was dairy products and food rich in protein which they would store in the pots that they made by themselves.

What is more interesting is that these remains also lead the researchers to analyze just how important familial ties were back in the Neolithic era.

“This research is really important because it allows us to see what’s going on in neolithic society. They are carrying out these burial practices that are tracing lines of descent … they are projecting their community forward into the future.”

Fun fact – the idea of a blended family is not modern. In fact, back in the Neolithic Age, the concept of a “stepson” did not exist. Rather they were adopted into the patrilineal line.

According to Ron Pinhasi, of the University of Vienna,

“It was difficult to imagine just a few years ago that we would ever know about Neolithic kinship structures. But this is just the beginning and no doubt there is a lot more to be discovered from other sites in Britain, Atlantic France, and other regions.”

Disclaimer: This article is fact checked

Scientists Claim The First Ever Beach On Earth Was In India